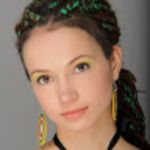 Hey @Tania Magdieva, sorry for the silence here! Wanted to let you know that we did receive this and we are looking at it. Hope to have an update for you soon!

Thank you!
Anyway, you work very quickly and efficiently!
:)