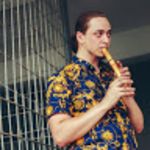 I’ve export some svg file into RIVE and then i’ve added some particles that i created in the RIVE to that Scene with SVG. After export i have only my SVG without any particles, that i’ve created directly in the RIVE app.

Why do they disappears?

Hey @Вячеслав Зеленый, I’m not sure I follow. You can’t export SVG from Rive. You export a .riv file that you need to load into our runtimes. You can test your file with our runtimes at https://rive.app/preview

We’re working on an improved export system that will make this a bit easier to understand.

Let me know if you have any questions or if I totally misunderstood what you’re saying!

I have the SVG file with a spaceship. Just spaceship made out of polygonal shapes. Without any other objects in the viewport.

I’ve added this ship to a scene in the Rive. Rive has created an artboard with this ship.

Then i’ve animated the ship, that she can fly.

Then i’ve added some particles made of circles directly in the Rive editor, they do not own to the svg naturally, they was created by Rive editor with shape tool. Then i’ve animated this particles and put it into a group within the ship.

But after the export to .riv and adding it to a runtime on the web page, there is only the spaceship in the canvas, no other particles that i’ve created with the editor in Rive has appeared. Not one. Only the ship.

Thanks for the detailed explanation, that makes sense. Definitely sounds like a bug.

What runtime are you using?

Can you send us the .riv file? Feel free to upload here or send to support@rive.app if you’d like to keep it private. @Вячеслав Зеленый

We are using the Web runtime from GIt repository.